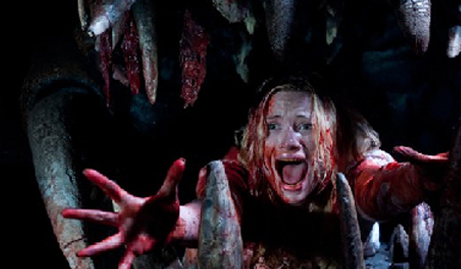 Buy tickets for The Millennium Bug

“THE MILLENNIUM BUG plays out like a love song to all of the horror films we all grew up watching. There¹s a dash of GODZILLA, a sprinkle of TEXAS CHAINSAW MASSACRE, and hell, even a bit of JURASSIC PARK mixed in.” – Ain’t It Cool News

When the Haskin family seeks refuge from Y2K hysteria in the isolated forests of the Sierra Diablos mountains, madness and terror find them there. Abducted by a vicious hillbilly clan, the Haskins fight for survival, but neither they nor the hillbilly Crawfords can comprehend the monstrous nightmare about to erupt from the bowels of the earth.

NOTE: This is a horror film that is totally free of CGI effects for the pure horror fans! Right on!

“A seriously gory flick that answers the age-old question of what would happen if Godzilla rampaged through a Rob Zombie movie.” – IO9

Since Kori fell in love with Mike Insane as a teenager, she’s been chasing bad boys. As she nears the big 3-0, she begs her best friend to set her up with a nice guy. While Kori struggles to love what’s good for her, she’s haunted by her dangerous past.